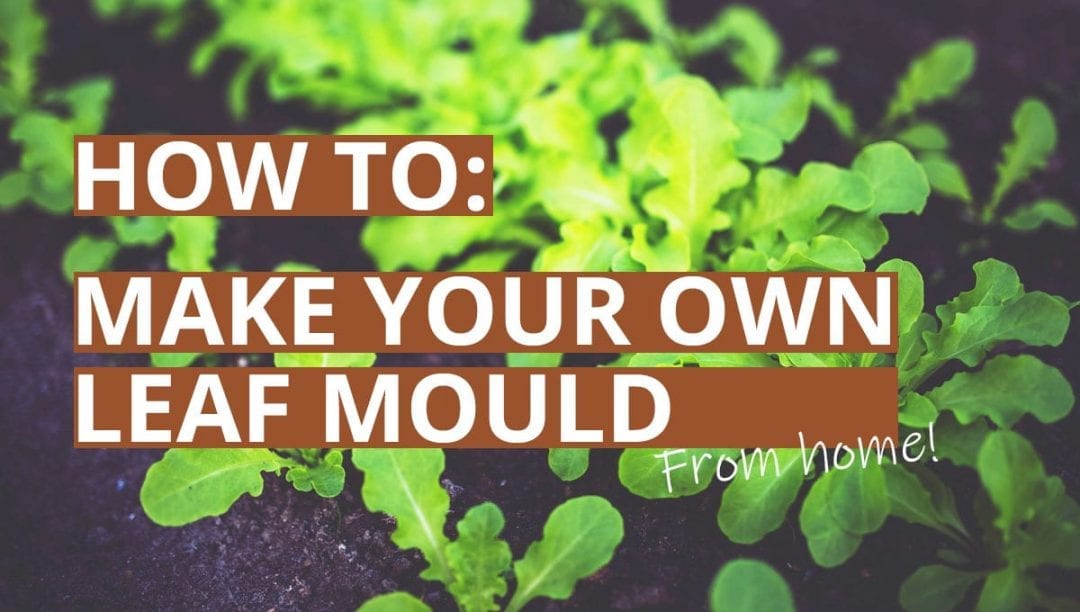 What is Leaf Mould?

Leaf Mould is compost made from tree leaves. However, unlike traditional compost, leaf mould is created through a fungal-driven process rather than a bacterially-driven process. The end result of leaf mould is an invaluable additive to soil. It’s a great organic method for creating homemade compost.

Essentially, leaf mould is a soil conditioner which increases the water retention of soils vastly. Good leaf mould can hold up to 500% of its own weight in water. It also greatly improves the soil structure and creates a rich environment for earthworms and other beneficial bacteria.

Leaf moulds have a lot of different uses and functions. It can be used as an extremely effective mulch, a soil conditioner, a potting mix or as a renewable peat substitute.

A good leaf mould has an dark brown, earthy texture.

Best leaves to use for a mould

Most leaves can be turned into leaf mould. However, some take much longer to compost than others. When creating your leaf mould you want to mix leaves which are of a similar type together so that they can rot down at the same speed.

Leaves that are quick to break down

Leaves that are low in fibrous lignin and high in nitrogen will produce you a good leaf mould within a year. These leaves are very quick to break down compared to others.

Leaves that are slow to break down

Trees with large and tough leaves which are high in lignin and low in nitrogen will take longer to break down and will be quite slow in creating your leaf mould. It would typically take the leaves around 18-24 months to break down, though we do recommend using a garden shredder which vastly improves the time it takes to break down.

Evergreen leaves feature a waxy coating and are prone to sticking together which slows down decomposition. It’s best to shred these so that they can rot down quicker.

Conifers are typically slow and can take two to three years to break down. It’s much better to shred these and add them to the compost heap rather than creating a leaf mould from them.

Some leaves such generally be avoided as they contain acids which can be toxic to other plants. They can be added if they only form a small percentage of the mould but it’s best to leave these out if possible.

When to make leaf mould

There’s no better time to start the process of making your leaf mould than when your autumn or winter garden is covered in fallen leaves. Rake these leaves into a pile and you’re ready to start creating your homemade organic compost.

How to create a leaf mould

The process of making leaf mould is incredibly easy and all you really need to get started are leaves and time.

There are two main methods we recommend for making a great leaf mould at home; the leaf bin method or the black bag method. We prefer the former.

You will want to make a square/round frame using chicken wire or anything similar which is supported on corners of the frame. The most common method would be to create a square using chicken wire and wooden tree stakes. We highly recommend building this in a more sheltered area of your garden to limit the risk of leaves blowing away.

We suggest making this leaf mould bin around 3ft high by 3ft wide. Heat breaks the leaves down quicker so ideally, we want it to be at least this size to speed up the process of our leaf mould.

You can now start to fill our newly crafted bin with leaves!

The leaves are best moist, not soaking wet. They’re best described as a wrung-out kitchen rag. This is the level of moisture we want for our leaves. Do not tightly pack the leaves as we need air to get through.

You should water the leaves as you’re adding them to the pile to ensure that all the leaves are moist. For e.g. add a bag of leaves, water and mix and then add another layer. We also recommend mixing them up as you go, being careful not to keep the leaves tightly packed together.

The great thing about this method is that it’s very much a make it and leave it process. You can now leave your leaf pile to decay over around a year (depending on the leaves used). You will be able to see you leaf pile gradually decay and get smaller over long periods of time.

The beauty of this method is that all you need are leaves, bin bags and time.

The very first step is simply taking your bin bag(s) and filling them with your leaves. You don’t want to jampack your bags so you want to fill each bag around 3/4 full.

You should then punch a few holes in the sides and bottom of the bag, typically with a pitchfork. You only want to do this a few times as you don’t want to damage the integrity of the bag.

Store the bags in a shady spot and you can then leave them there to decay over the following year(s). If you want to use your leaf mould as a soil conditioner you probably want to leave the bags for around two years.

This method is great if you only want to create a smaller amount, if you wish to create a greater amount then the leaf mould bin method is probably better suited for you.

Tips for making your leaf mould

Two years can be a long time for making leaf mould, but there’s a few things you can do to greatly speed up the process.

Shred your leaves! The number one method of speeding up the process is to shred the leaves. Creating leaf mould is all about how quickly the leaves can decay, the smaller the leaves the material the quicker it decays. This could potentially cut the process of creating your leaf mould down by half!

Take a look at our compact wood chipper and garden shredder products to find the best method of doing so. The FM6DD and FM4DDE are electric and petrol counterparts which enable you to chip and shred branches and leaves. Perfect for cutting down your leaves to smaller sizes and drastically reducing the time required for them to decay.

Click here to view a video of us shredding leaves and other green material.

Add Nitrogen! Autumn leaves or high in carbon but heavily lack nitrogen. By using little nitrogen-rich material within your pile you can increase the speed of decay. An example of some materials high in nitrogen that you can use are grass clippings and coffee grounds.

Jae McDougall
Posted in:
Gardening, How to
Tagged:
How to:
Previous article
How to Maintain Your Petrol Wood Chipper
Next article
How to make compost at home
Leave a Reply Cancel reply
Tags
Accessories DIY Gardening How to: Informative Log Splitters Log Stores Saw Horse Tips and Tricks Wood Chippers
Recent reviews
Free Next Day Delivery