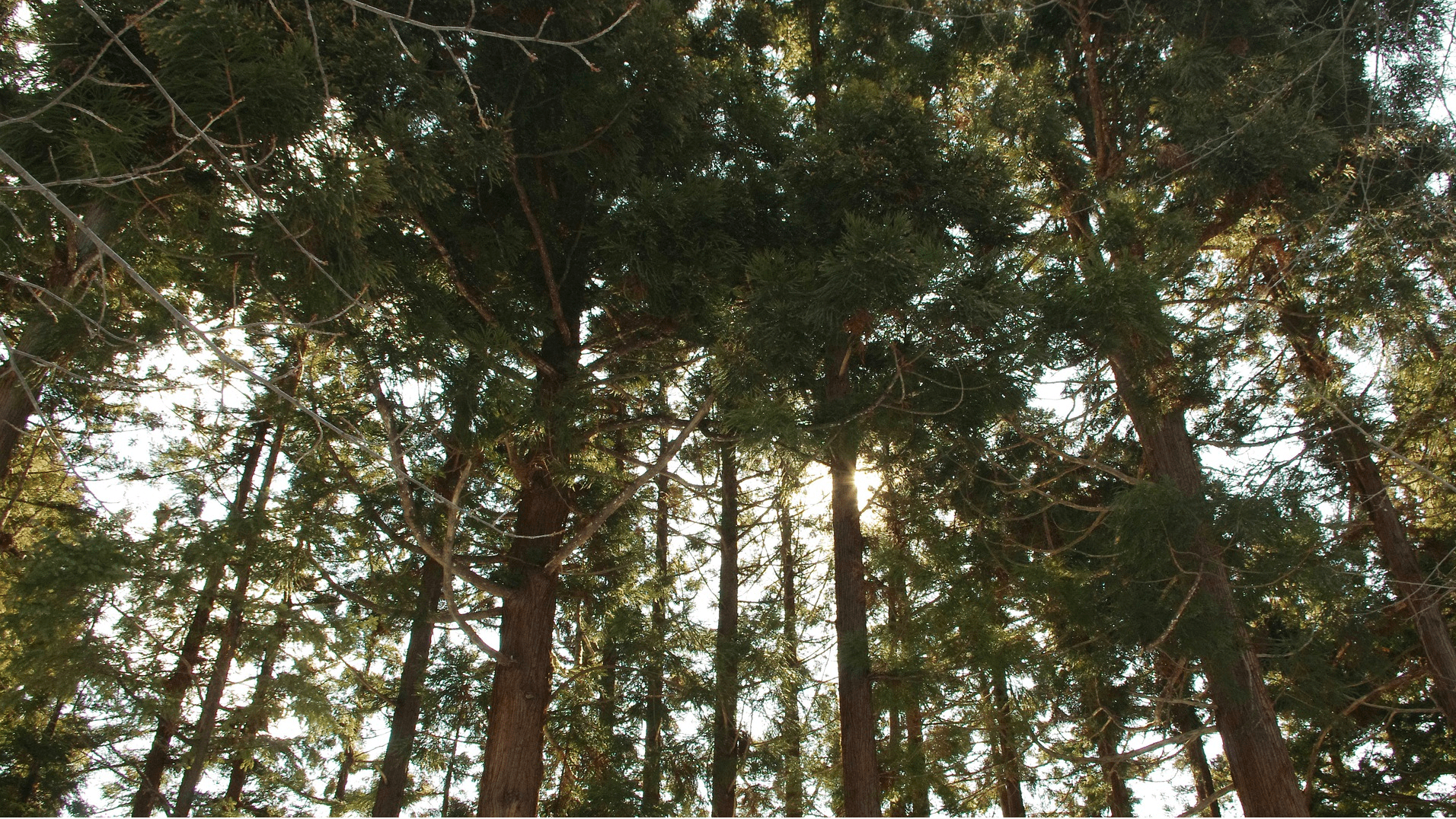 Modern day Japan is often hailed as the bastion of technological innovation, so much so that many have described its bustling cities as a glimpse into the future. Yet in spite of its numerous achievements, booming economy and a ruthlessly diligent work ethic, Japan has somehow managed to maintain a profound and respectful relationship with nature– and in particular with its trees.

From elaborate tea ceremonies and the delicate art of bonsai, to sake cups and the endless stacks of paper in the salaryman’s office. Trees have a distinctive presence in all facets and walks of Japanese life. Whether you’re in the sweeping Japanese countryside or in the concrete metropolises of Tokyo and Osaka– no matter where you are in the country, you are never too far away from these wooden giants.

But to what reason do the Japanese owe this national obsession, and what does Japan’s rapid urbanisation mean for the future of its beloved trees?

Nature and the Divine

Many of the traditions and beliefs in Japanese culture that have survived into the modern day have their roots in the native religion of Shintoism. Shinto was founded on the worship of god-like spirits called kami, and at the heart of the faith lies a deep reverence and appreciation for the natural world.

In Shinto belief, the kami can be invoked for their blessings and protection against evil spirits. Rituals are performed to call the kami to descend and inhabit an inanimate object, transforming it into a shintai, the physical body of the spirit. Shintai can be manmade (and even household) objects, but are usually naturally-forming entities– which can be anything from rocks, mountains, waterfalls and, of course, trees.

Trees that become shintai are called shinboku, and are a common sight in shrines throughout Japan. The shrines themselves are built to worship, accommodate and protect the kami dwelling within the sacred space. The forests that surround the shrine form chinju no mori (sacred groves)– which serve as a safe haven for the kami, and as a natural barrier between the profane world and the sacred.

For many, the dense and serene forests that dot Japan’s landscape have become synonymous with the divine.

An astounding 67% of Japan’s total land area is covered by forests, and the varying climates of the country’s different regions have allowed for a large diversity of trees to grow. Japan is home to over 500 indigenous species of trees, which accounts for an eclectic mix of coniferous, evergreen and flowering varieties.

Pine trees (generally referred to as matsu), maple trees (momiji), as well as numerous imported Chinese and European species are a common sight in towns and cities throughout the country. Unusual varieties such as towering bamboo trees (take) and the lilac drapes of the Japanese wisteria (fuji) also grow in abundance.

In the Spring, people from all over the world congregate in their thousands to admire the fleeting beauty of the sakura, the blossoms of the cherry tree. The lumber of Japanese cypress (hinoki), Japanese red pine (akamatsu) and Japanese cedar (sugi) are widely used for the construction of housing or shrines.

Traditionally, housing in Japan was built almost entirely out of wood. Master carpenters, or Sukiya-daiku, built everything from small village houses called minka, to grandiose castles for feudal lords. Japanese carpentry utilises a series interlocking joinery that is carved into sawn wood to hold the building together– impressively without the use of screws, nails or adhesives.

The majority of traditional Japanese interiors are influenced by nature. Large open-plan utility spaces once packed away evoke the tranquillity of a woodland stroll, and elegant paper partitions ensure that the inhabitants are never cut off from the surrounding environment outside. Even the composition of Japanese buildings is inspired by the very resource used to build them– the wooden foundations resemble a tree’s roots, the sturdy framework is its trunk, and the thatched roofs its branches.

Until the Great Kantō earthquake in 1923 and the influx of Western influences after World War II nearly all housing in japan was made this way, demonstrating the Japanese people’s profound desire to be at one with nature.

Similar techniques were utilised by artisans known as Miyadaiku (Shrine carpenters) to build Shinto shrines and Buddhist temples. These structures are as varied as the deities they were built to worship, both architecturally impressive and beautifully ornate in order to house and honour the god enshrined within.

In one way or another, the Japanese way of life seems to promote a distinct harmony with nature, in which the tree plays a prominent role. However, despite the country’s reverence for all things natural, a potent and deadly threat continues to loom over the canopies of its forests.

The Threat of Deforestation

Japan’s deforestation problem began way back during the Tokugawa shogunate in the 17th century. With the nation unified after a century of civil war, widespread peace ushered in an age of expansion. In the new capital of Edo (now modern-day Tokyo) infrastructure began to expand, constructing all manner of houses, castles and shrines–

to which the rest of the country followed suit. The demand for logging grew and grew until nearly all of Japan’s forests had been chopped down. The complete ecological disaster was narrowly avoided by the mass plantations of hinoki and sugi trees.

During World War II, thousands of acres of ancient forest was cut down to make way for cedar plantations, in order to meet domestic demands for building repairs and fuel. Even after the war, forest space was cleared to become land for farms to feed the hungry nation. Sadly, less than 1% of Japan’s old-growth forests survives today.

Although these aforementioned disasters may seem like a lifetime away, the threat of deforestation is echoed even today. Modern Japan continues to redefine its landscape– increasing construction of high-rise buildings, unnecessarily damming and lining rivers with concrete, and continuing to plant uniform tree plantations.

This behaviour is what cultural critic Alex Kerr identifies as the great ‘thoroughness’ of the Japanese identity, embodying the country’s desire to become progressively more civilised and industrially productive. It is this extreme productivity that drove the ambition for the mass development in Edo, as well as in the modern rebirth of post-war Tokyo.

The urbanisation of Japan over the centuries has also led to the destruction of the many sacred groves surrounding shrines and temples in cities. Ironically, after the increase of cheaply-imported wood sourced outside the country in the 1950s, many of the Second World War plantations have been long since abandoned. Japanese manufacturing companies have also been known to exploit weak logging regulations in countries like Malaysia and Papua New Guinea, completely wiping out forested areas and leaving Japan’s own forestry industry in a dismal state.

After coming under international scrutiny from other countries and environmental groups at the turn of the 21st century, the Government of Japan has begun to address these ecological issues to mixed results. The Green Purchasing Law that passed in 2000 was designed to take action against illegal logging, but in fact only accounts for 5% of Japan’s imported wood. The law only encourages companies and businesses and local governments to choose sustainable wood, rather than imposing strict laws on illegal importation of timber such as in the United Kingdom, European Union, United States and Canada. However, Japan has established afforestation programs in the various countries that it has affected.

Many of the abandoned plantations across Japan are now ready to be forested. Initiatives like the Green Employment Project have been set up to provide support and jobs for young people in the Japanese forestry industry, in an attempt to kickstart the trade. The establishment of ‘Forest Universities’, locally-ran academies in rural areas specialising in forestry courses, have also begun to bolster the workforce.

Finally, in 2007 representatives of the Shinto religion met with other world faith groups to develop the International Religious Forestry Standard, a bill of conservation criteria created not only to protect the chinju no mori of Japan but sacred religious forests across the globe.

The issues that have been raised over Japan’s trees and its logging companies’ conduct abroad are numerous and seemingly insurmountable. Between illegal logging and fighting to control its own natural landscapes, Japan has a lot of dirty work on its hands– to which the government has been sluggish to address. As it currently stands, the country is far from a truly sustainable future, however new evidence shows that Japan is beginning to turn a new leaf in its history with its trees.

Enjoy this article? Check out our other blog posts here