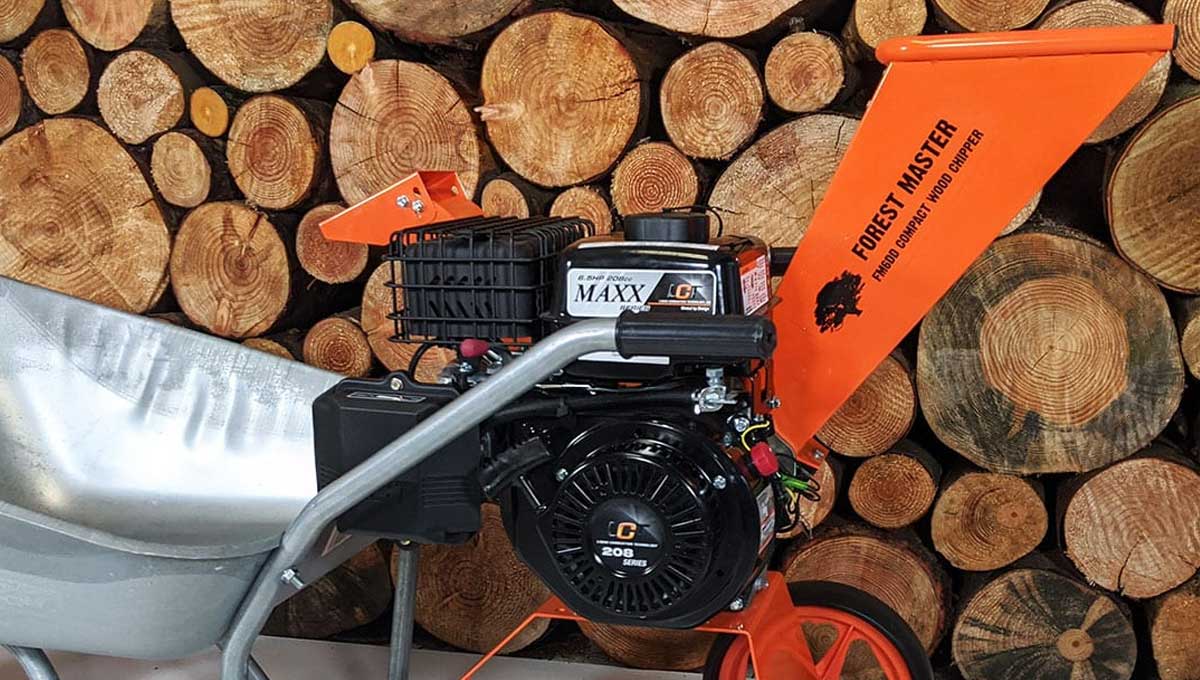 The Forest Master FM6DD Wood Chipper Garden Shredder claims itself as the best wood chipper on the market, competing with the likes of Bosch and its AXT25 and T-Mech’s 15hp petrol chipper. Is it really the case, and what can you expect from such an advanced bit of kit?

Wood chippers are in theory a very simple. There are a number of different approaches to how the machinery chews up a branch or piece of shrubbery, each with its own pros and cons. Powered either by an electric motor or a small engine, obviously the more powerful the mechanism inside, generally the better it is at chipping. However, this is not always the case, as ingenuity on behalf of the designers plays a part as with anything.

The Forest Master FM6DD features a powerful four stroke 208cc engine capable of tearing through branches and foliage of up to 2 inches thick at an staggering rate of 3600rpm. This compact piece of kit features a direct drive without belts and therefore guaranteed to never lose performance, and will resist the test of time. And on top of all that features an ingenious manually adjustable chute allowing you to dispose of waste straight into a wheelbarrow or bag. Shredding has never been easier.

Whilst a majority of chippers have a motor that’s connected to a drive belt, which in turn is connected to a blade, the FM6DD does not feature a belt and is instead direct drive considerably increasing the longevity of the machinery. Research undertaken by engineers at Forest Master found that the most likely piece of the machine to give out was the belt, leading to frequent services and increasing the running and maintenance cost. A belt can’t be faulty, if there’s no belt to go faulty.

We’ve not even mentioned the fact that the weight to power ratio is currently unrivaled on the market. The average customer wants something lightweight and portable. Looking at the Bosch AXT 25 which is the closest to the FM6DD in terms of power output, weighs twice as much at 75kg as opposed to 38kg . This allows the FM6DD to be stored and transported much easier, fitting through a standard sized garden gate with ease and fitting inside most sheds with room to spare.

In fact, the Forest Master model has been given top spots in highly accredited forestry review sites such as bestreviewer.co.uk and upgardener.co.uk. But this isn’t just a post for us to boast about how good our own product is (even though we know it is) so we’ll compare it against a few other models for you to make up your own mind.

You can see for yourself, it’s hard to argue that there is a most cost effective wood chipper available on the market. Ready to purchase yours? Head over to Forest-Master.com to pick up for FM6DD now.

Cieren Ware
Posted in:
Chippers
Tagged:
Wood Chippers
Previous article
Log Splitter Guide – What is the best log splitter for you?
Next article
Which Log Splitter to Buy: Petrol vs Electric